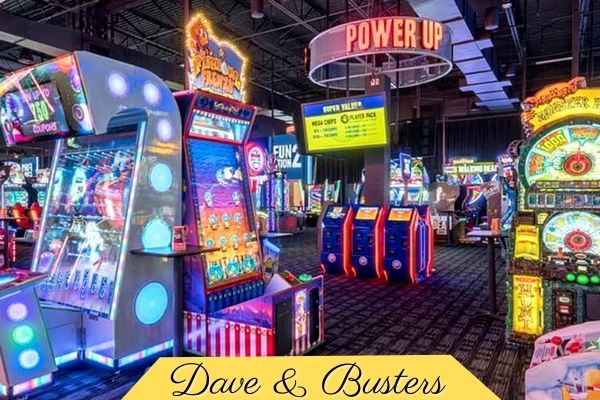 You must have heard of Dave and Buster’s restaurant chain. The restaurant is more than just a place to eat; it’s also a gaming zone and a place to watch sports.

Here you can come along with your kids too, without worrying about them crying, as there is a dedicated game zone.

Talking about the food that is available here, they serve all kinds of food and drinks, both for adults and for kids. So, you will have plenty of options to choose from, and definitely, the host or hostess will be helpful in deciding according to your appetite.

Dave and Buster’s provide a large variety of games to choose from and hence kids love to come here. They have games like Hungry Hungry Hippos, Star-Trek, video games, and many more.

Billboards and bowling are also a part of the gaming zone, which always attracts the adult audience. Besides this, they also have virtual reality games to give a feel of all the new tech coming on the market.

You can play these amazing games either by buying chips and tokens or by purchasing a “Power Card”. If you are a foreigner and a one-time or two-time visitor, then buying chips will be the right option for you. But if you have a D & B store nearby or are a regular customer there, then buying a power card will save a lot of your money while also bombarding you with some amazing perks.

What are the benefits of having a “Power Card”?

The Perks of Having a Power Card: These power cards enable a variety of incentives, including limitless games for a low fee, fast tap-in plays on a variety of games, and cashback on recharges. For example, if you recharge your card for $20, you will receive an extra $20, for a total of $40 on your card.

The cost of activating a new power card is $3, which includes the power card as well as 15 chips to play with. The chips range in price from 13 cents to 20 cents per.

Unlimited access is the most well-known option from Dave & Buster’s on their Power Card. This package costs 19.99 dollars and gives you unlimited access to the games for a set length of time. Another 25-dollar package, dubbed “Superpower,” grants you privileged access to even more games.

Some Quirky Facts About Dave and Buster’s

Ans. Check your Power Card balance on the Power Cards page, by calling (888) 300-1515, in-store at any Power Station or Rewards Kiosk, at any Dave & Buster’s location’s Front Desk, or by downloading the Charging Station Mobile App.

To enter the premises, you must be at least 18 years old. Persons under the age of 18 or 21 (depending on location) must be accompanied by a guardian who is at least 25 years old.  Each guardian is only allowed to bring six minors onto the premises.