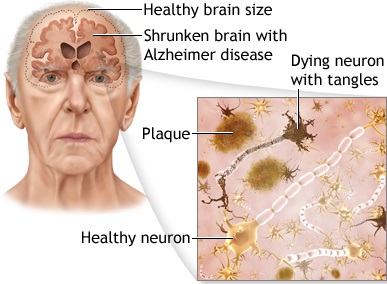 Alzheimer’s disease impacts older individuals and causes progressive dementia. It starts with short-term memories and eventually expands to long-term memories. The individuals will gradually use their ability to retain memories. This included forgetting to do things they once did naturally, like driving or opening a jar. Constant care becomes critical as the effects of dementia can become dangerous as the individual may wander away and get lost, leave the stove on because they forgot they were cooking, or get injured due to their behavior.

There are many diseases and disorders that can lead to forms of dementia. Alzheimer’s disease, however, is the most common. It is also closely associated with dementia because that is the primary symptom and result of the disease. Other diseases like Huntington’s Disease cause various problems, and dementia is one of them. The onset of Alzheimer’s Disease can be difficult to detect because the memory loss is subtle at first.

There are cases of what is referred to as early-onset Alzheimer’s, which is believed to be linked to a genetic predisposition. While it may not be commonly thought of as genetic, one identified risk factor is biological sex. Women are more likely to develop the disease than men. It is also most common in elderly people, so age is significant. People as young as 30 have started showing signs of the disease. Early-onset Alzheimer’s is believed to be hereditary, but researchers have yet to identify the genetic marker that causes it. Additionally, once it is identified, it is not clear if it can be prevented.

Certain medications have been linked to an increased risk for Alzheimer’s Disease. Those drugs include non-steroidal anti-inflammatory drugs referred to as NSAIDs and cholesterol-lowering drugs called statins. The links are unclear, and researchers are not sure if the links are causal or correlated. These are identified as risk factors solely because the research has shown that these factors have been identified as common among people diagnosed with Alzheimer’s Disease. Education level and previous history of head trauma have also been identified as risk factors. Over the course of the disease, cognitive decline and memory problems will progress at different rates.

Researchers have also found lifestyle factors common among people with Alzheimer’s Disease. Dietary habits, high blood pressure, and high cholesterol have all been linked to the disease. As mentioned earlier, cholesterol-lowering medications have been linked to the disease, so it is up to researchers to determine if the link is to the high cholesterol or the medication to treat the high cholesterol. While many people argue that lifestyle is not a significant factor in health problems, the research on disease causation shows that may not be true. This isn’t to say high blood pressure or high cholesterol causes Alzheimer’s Disease, but some connections need further exploration, and inflammation and heart disease are factors in that research.

Determining the cause of a disease is a long and complicated process because there are many potential variables to account for. Additionally, individual body chemistry plays a part that is not fully understood. For example, an individual may display all known risk factors but not develop Alzheimer’s Disease. In contrast, another individual may display only one risk factor or none at all and still develop the disease. There is still a lot of research to be done and many questions to be answered regarding the development and progression of Alzheimer’s Disease.