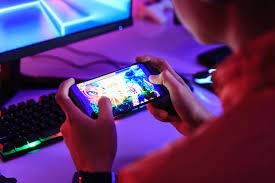 Online gaming was quietly bubbling away in the 80s and 90s, but a lack of widely accessible technology meant it couldn’t hit its true potential until the 21st century. Nowadays, online gaming is everywhere, from remarkably successful console gaming titles such as Fortnite to popular mobile games, including Genshin Impact. Players can enjoy a wide variety of game types and genres, with many options available for free.

While it’s easy to find fantastic online games in 2022, it can be harder to choose what platform to play on. Many people prefer mobile online gaming because they can play on the move, although some diehard gaming enthusiasts would never play on anything other than their desktop computer. Keep reading for a comprehensive overview of how to choose between desktop and mobile gaming in 2022.

Types of desktop and mobile games

Players have an extraordinary amount of choice regarding desktop and mobile games in 2022. Before we delve deeper into the pros and cons of each platform, check out some of the main types of games you can enjoy:

How mobile games rose to the forefront

Mobile gaming has become incredibly popular over the last decade or so, but it took a while to get there. One of the main obstacles for developers in the early days was a lack of widely accessible technology. Old mobile phones could run things like Snake but not much else, making it difficult for developers to attract gamers from their desktops.

Fun desktop games not to miss

The desktop games listed above are extremely absorbing, but you cannot always be at your desktop. This is where online mobile games come into their own, offering players hands-on entertainment while on the move. Here are a few of our favorite options currently:

Desktop vs mobile games: Which one emerges victorious?

Choosing between desktop and mobile online games predominantly revolves around personal preference. Mobile games will be preferable if you’re constantly on the move due to their versatility. They allow you to have gaming fun while on your commute to work or daily walk, but you’ll need to have a top-tier powerbank to ensure you have enough charge to keep playing.

On the other hand, online desktop games are the best options for more serious gamers. Modern high-spec computers can run outrageously clear and HD graphics, meaning you can spot enemies easier in FPS games or enjoy the graphics in racing simulators such as Gran Turismo to a much higher degree.

Ultimately, the choice between mobile and desktop online gaming in 2022 comes down to you. Decide on what you want to get out of online gaming before making your choice based on the pros and cons of each.