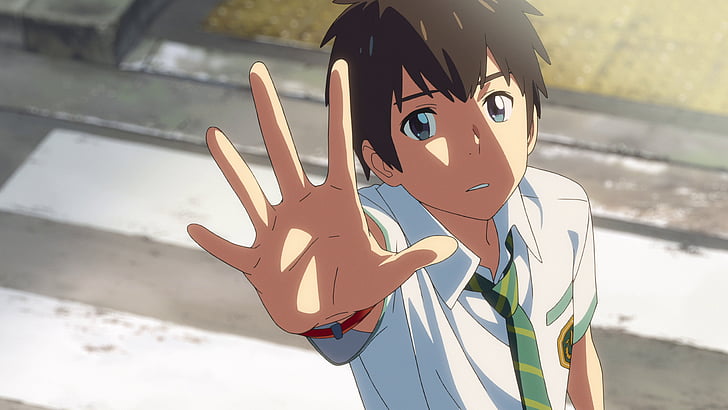 Taki Tachibana is the male protagonist in the movie Your Name. and has also made a cameo appearance in Weathering with You. He  potrays a high-school boy living in the city- Tokyo . He also works a part-time job in an Italian restaurant. Taki passes time hanging out with a number of friends, and seems to express an interest in the field of architecture.

Taki is a young man who has an average height and build who is, by Mitsuha’s admission in her wish before the first switch, “handsome”. He has nape-length, spiky brown coloured hair with bangs which cover his forehead. He has dark blue eyes.

When he was fourteen years old, he had a even smaller built body, with a height which was comparable to Mitsuha’s. His middle school uniform consisted of a white shirt with a pale yellow blazer on top of the shirt. and green tie.

At the age of 17, He was evidently taller than Mitsuha. He generally wore a plain white tee shirt and blue shorts as his casual wear. For school, his uniform consisted of a white dress shirt with striped green tie and a dark blue blazer, this was just a slightly different version of his earlier uniform. Along with dark grey pants and a black belt around his waitst. To finish the outfit he put on dark blue loafers. For work, he wore a white long-sleeved dress shirt, with dress pants and a vest. He also wore a bowtie and apron that was black. During his date in one of the episodes, he wore a dark jacket with a V-neck shirt striped with the attractive colours- orange, blue, and white. He paired that with khaki pants, and black sneakers.

Taki Tachibana was seen wearing Mitsuha’s braided cord since the time she gave it to him when he was 14, till the time he returned it at the age of 17.

As an adult, Taki had grown in height and gained broader shoulders than his earlier self, his facial features had sharpened, but his overall appearance remained recognisable. While looking for work, he wore a black suit with a blue coloured tie. At his grandmother’s place, he wore a white polo neck t shirt with a pair of brown pants.

Taki is recognized as a kind, diligent, and caring individual. He possesses great passion for art and architecture. He is very organised, with Mitsuha even noticing it from time to time.

Though Taki is also known to be quite rash and hot-headed; i.e. he is short tempered as he very often tends to blurt out all the first thing on his mind without giving attention to the situation. This sometimes gets him into fights with others. Due to his hot bloodedness, Taki has no problem when it comes to defending himself. 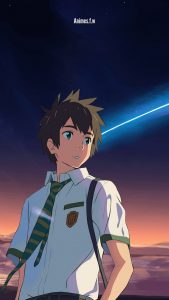 Taki Tachibana takes immense pride in his charisma. He believes that his presence in her life had made her more popular. Despite this fact, he isn’t very confident in romance himself. As he is particularly quite defensive about his lack of a girlfriend, and even struggles to make conversation with Okudera during their date in an episode. But Above all of this, Taki’s defining trait is his utter determination. He was very set on his research and dug up stuff. He found out that Mitsuha passed away three years ago. Yet he kept onlooking for a way to connect with her.

As an adult, Taki’s personality did not change much. He still loved bantering and joking with his highschool friends, but he had gained a more mature but somewhat sulky personality. Taki had constantly felt an emptiness, may be it was due to the missing memories, which influenced his will towards creating  the “heartwarming landscapes”. He also desired to make an architechture that would stand the test of time.